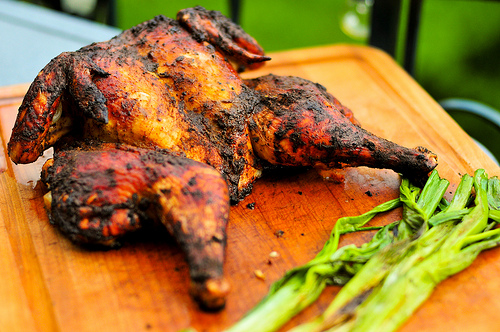 [Who am I and why should you read my review? I’m Mexican-American, a product of immigrants from Chihuahua and Colima, and born and raised in LA. Spanish is my first language and I grew up in the incredibly unstable and normalized environment of East LA in the late 80s/90s. Oh and I’ve taken several creative writing classes. So that pretty much makes me like totally at least as credible as Cummins so no reason why you shouldn’t believe me.]

Chapter 2 opens with Luca clearly traumatized. Who is telling us that Mami is back or that Luca is terrified? Unclear. Is it a sister that is narrating the events? Luca’s POV?

Is it Mami’s opinion that it may be better for 8 year old Luca to witness the carnage left by the 16 dead bodies because what he imagines may be totally worse. Somehow it seems a stretch that an 8 year old can imagine a worse fate for his 16 relatives.

Paragraph three continues with the usage of Mami and Luca, implying that this is Luca’s POV.  But also a third person who is not Luca. Who is the narrator here? Unclear.

After experiencing the most traumatic event of their lives, Lydia a brand spanking new widow and orphan takes her now fatherless son outside to wait for ‘help’. They wait like sitting ducks on the yellow-painted curb. What?!!!

I’m not comparing 90s LA to current Mexico but I do believe that there are similarities when you grow up in an environment that makes you street smart. And regardless of how much avoidance Lydia may have practiced, as a business owner, she was well acquainted with the cartels as she had to interface with them when paying her mordidas (payments to the cartel for ‘protection’). She had witnessed the violence. So she and Luca had to have some semblance of street smarts.

Any small child that grew up around the constant drive-bys of 80s and 90s LA will tell you that after a drive by, after any confrontation with gangsters wielding guns, the last thing you do is go outside and wait by the curb. Especially when you’re afraid that they may come back because they didn’t get what they wanted the first time around. As someone who lived in Westlake / Boyle Heights / East LA in the late 80s/90s I can tell you that after a drive by, everyone ran inside and stayed inside. You did not walk outside waiting for the police that you knew was going to do nothing anyway.

Since the previous scene occurred during a Quinceañera, I will throw in my experience during my older cousin’s Quinceañera (held at my aunt’s house in East LA in 1995). I was waiting in line to go to the bathroom. My mom and several of her sisters had been in the kitchen preparing plates of barbacoa to serve. We heard some yelling and thinking that it was a drunk uncle, several of us ran outside to see what was happening. Me being the 13 year old chismosa that I was, ran to the front porch to see what was going on. My great aunt Chole, who seemed to sense that it wasn’t a drunk uncle, yelled at me to stay inside. Two cholos were at the front gate, drunk, saying they were there as my cousin Michael’s guests. Michael, Chole’s son, was my loser cousin who was constantly in and out of jail always trying to emulate my uncle who was heavy in one of LA’s biggest gangs. My tio Baby was trying to calm them down by offering them a case of beer and food to go, repeating that Michael wasn’t there. They took the beer started to walk away and then turned around and opened fire into the sky. Everyone ran inside. There was not a soul left outside as these assholes lingered a little longer laughing and shooting aimlessly again before driving away. My tia Chole was hysterical. She was screaming and crying that they were going to kill everyone. Someone slapped my tia and told her to shut up, that she was scaring the kids. But the kids were quiet. We were all crammed into a small bedroom not making a sound. And when the cops finally came, instead of trying to help, they harassed my uncles as if they had been the ones to shoot. As soon as the cops left, everyone went home and we never talked about it again.

I’ve lived through many drive-bys and have had a gun pointed right at me twice. It wasn’t by being brave that helped me survive. It’s that I pretended not to see anything and walked right by as if nothing happened that helped me survive. And I definitely never waited for ‘help’ outside, only a pendeja would sit curbside, making it easier for whoever was looking for me to use me as target practice.

Back to American Dirt…

“Mami, whose name is Lydia, becomes aware that her teeth are chattering.” Someone please tell me who is narrating this for us!

Luca throws up “a glob of potato salad, stained pink with fruit punch.” Can someone explain to me why an 8 year old would eat potato salad at a Mexican Quinceañera? I mean if we’re trying to stereotype Mexicans, the author could have remained consistent and just said arroz y frijoles!

We’re thrown into a moment of deep reflection by Luca who realizes that Acapulco is a dangerous city.

When the police arrive Lydia ponders where to send Luca, to shield him. But she realizes that her mother, sister, and husband are all dead and that it’s “all meaningless anyway.” The police won’t help. So she cries. In front of her son. And her 8 year old son steps in to protect her. And a moment later Luca acts like a kid on a typical day by dangling his feet over the detective’s back bumper while the detective offers him a drink. Not just any drink but a “cold refresco.”

If I were 8 years old and I had just lived through what Luca lived through, I highly doubt that I would be chilling off to the side dangling my legs as if nothing happened. And I definitely would not have accepted some bullshit refresco as a consolation.

The detective starts interrogating Lydia and the only information he thinks to write down is not that there were three men, not that there are possible fingerprints on the bathroom faucet, but that “one ate the chicken.” “Pollo” he writes. Because if anything is going to crack this case open it’s going to be the smell of freshly grilled pollo on a perpetrator’s breath.

Lydia offers the name of her husband, a reporter, as the target. The detective notes the many death threats that he must have received. Lydia adds that the cartels threatened to kill his whole family. So Lydia knew that her life was in danger. As a mother she knew that her son’s life was in danger and yet it never occurred to her that it would be unsafe to remain where they were. And then she realizes that they will kill her too.

We’re thrown into another moment of inner reflection, this time it’s the detective’s mind we are in. He trusts no one. He is not on the cartel payroll. But his colleagues? Who knows, some of them are for sure. I mean look at Mexico’s 90%+ unsolved crime rate. <Source? Who needs sources? I mean this is Wild West Mexico we’re talking about> Even though we are in the detective’s mind, we are told that Lydia knows that the police are an illusion. The same police that she was waiting for on that curb.

We’re fully back to Lydia where she realizes that they will return to kill her. Oh and her son too. Yikes it just occurred to her that they are going to want to smoke her kid so she should like totally get out of there. Especially because she totally knows that this was her bestie Javier Crespo Fuentes. Who she totally didn’t know was The Narco but you know hindsight is 20/20 and all that and so she now knows exactly who he is and that it was him.

The detective writes “La Lechuza?” “Los Jardineros?” And we wonder what an owl or gardeners have to do with all of this. He shows his notebook to Lydia because apparently he forgot how to speak. She pushes past him because now that she knows that she can’t trust anyone, she totally has to get her dead husband’s keys to the most recognizable car in the world to get out of there before anyone sees her.

Lydia trusts the detective (without any reason as to why she should trust him) to look after Luca while she goes to fish the car keys out of her dead husband’s pocket. She is confronted with the “sweet odor of lime and sticky charred sauce” and I wonder what kind of barbecue this Quinceañera is serving?

“She knows that the relative neatness of his death is a sort of deformed kindness.” This woman just had her whole family callously gunned down during a Quinceañera. There is some dead 15year old girl lying on the ground somewhere. Red blood splattered over her young face, her white dress stained red. There are 15 other bodies in states of permanent terror lying lifeless in her backyard. Blood everywhere. Yet Lydia is high minded enough to think this is kindness. Her stages of grief must have iterated through lightning fast.

But Lydia has seen other crime scenes you see! She’s seen the mutilated body of a neighboring business owner displayed as a warning for business owners that refuse to pay the mordidas to the cartel. So it could totally be worse you know? So she’s super grateful.

And in her moment of clarity, Lydia hurries to get the car keys but pauses first to pull off the wedding ring off her dead husband’s finger. She then moves on to look at her dead mother but stops when she agrees with a police officer that this is no longer her mother. So poetically she agrees, why spend more time in this “landscape of carnage”? She returns indoors to pack her shit and somehow knows that her mom keeps a wad of emergency cash under her mattress. She packs the essentials, you know, cookies, chips. How old is Lydia? 10?

So Lydia continues onto her car parked outside this nice neighborhood. Which car? A 1974 VW Beetle. And orange one. Can’t make this shit up.

Lydia wonders if the car has a bomb and spends an eternity taking stock of the situation even though the message “Boo!” written on a piece of paper and affixed under the wiper should be enough to tell her to back the heck up.

She realizes once again that they have to split because Acapulco is totally unsafe now that her bestie the narco Javier Crespo Fuentes is onto them. Oh and in case we didn’t know already, they can’t drive the car. Whaaaaat? Didn’t see that coming.

Lydia’s naivety is annoying for sure but what makes this chapter a total toss away is how passively everything happens. People are gunned down and left in the backyard. Lydia has lost her husband, mother, and sister. Luca has lost his father. They have lost their life as they know it. And they have to flee. This should be a chapter full of suspense and fear yet it feels so blasé like we’ve totally seen this before and know exactly how it will end. Who exactly knows this? If we knew who the narrator was we would ask.